Replica of the 17th century coastal trading ketch Adventure (Charles Towne Landing State Historic Site, SC).
While often overlooked in favor of larger, grander vessels, small coasters such as this not only held the colonies together but also ventured to the Caribbean and beyond. Most colonial era seafaring thrillers focus on sea-going ships but there was more than enough action, suspense and romance to be found among the adventures of the coastal trade to drive great stories.
hashtag#vessels hashtag#historicships hashtag#colonialships
…see more 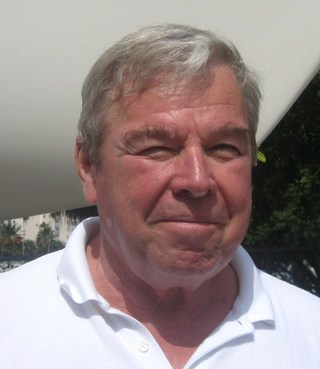 I was born in 1944 in Yonkers, NY. Since then I’ve spent far too much time messing around with books and boats -- big ones, little ones, here, there.

I’ve published six contemporary nautical thrillers (three under my own name and, under a pen name, a series about sea-going terrorists and the team with the guts and wits to neutralize them), one nautical historical, one murder mystery and hundreds of magazine and newspaper articles on all subjects. I spent my junior year of high school aboard a square-rigged school ship where I learned, if nothing else, to hang on for dear life when aloft in the rigging; majored in Spanish literature at Dartmouth College; did my foreign study at the University of the Andes in Bogota, Colombia; served as a naval salvage diving officer (a ‘Bubblehead’); devoted twenty years to educational publishing; started several other business ventures of questionable success; traveled and raised two daughters (the greatest and most nerve-wracking adventure of my life).

When I write I aim for accessibility, intense but plausible action and interesting, fleshed-out characters. In order to take full advantage of rapidly advancing technology and to attract new readers I’m currently reaching out in new directions. The basics, however, remain the same.

New, New, New
A Murder Mystery
DEATH OF A SIREN

Do sirens sing intentionally to trap sailors, or do they sing because it is their nature to sing?

The year is 1938. War is soon to break out in Europe and the body of a beautiful German baroness is found, with a hatchet planted in her head, in the Galapagos Islands, seven hundred miles off Ecuador. Castaway Fred Freiman, a German-American, New York cop on the run from both the NYPD and the mob, finds the body and then finds himself trapped into identifying the murderer or murderers as world and local intrigues and personal passions swirl around him. Early on he meets and falls madly in love with Ana de Guzmán, a young, very wealthy and very clever Ecuadorian woman who collaborates very actively in solving the tangled mysteries.
The suspects are many, ranging from colorful recent German and Norwegian settlers to shady Americans to an elusive German believed to be an SS officer as well as to a seemingly insane German and finally to the Ecuadorians themselves. Motives and relationships are equally wide-ranging and shadowy while every second of the drama is played out in the edge-of-the world enchantment that the Galapagos do, in fact, possess.

" A deftly crafted and compelling read from beginning to end, "Death of a Siren" showcases author William Schall as a master of the genre" - The Midwest Book Review

Just Reviewed by The Historical Novel Society - Please take a look at it.

THREE SHORT STORIES TO ENTERTAIN YOU
- CLICK ON MENU ABOVE

The Pirate Who Got Away - Piracy is a Dirty Business, Especially when Julius Caesar is Involved