Master of the Universe - A Sea Story 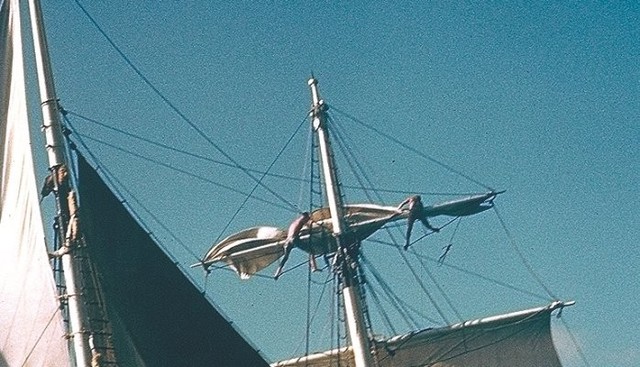 It was another magical day. The sky and sea were a deep blue, the wave crests a crisp white. So perfect was it that he unthinkingly volunteered to furl the topgallant.
He leaped onto the main ratlines and headed up. At the foretop he pulled himself onto the topmast ratlines and in no time was at the crosstrees, where the topgallant ratlines started. These, the uppermost ratlines, were truly the stuff of nightmares. Narrow and far from taught, they twisted and swayed in a very alarming fashion. Fortunately, he had only a step or two before he could get his foot on the lowered yard’s foot ropes and his arm around the yard itself.
With the foot rope securely trapped under his arches and his hips pressed against the yard, he paused to admire the world around him. The ship so far below, slicing through the blue sea. The sails billowing white. The islands, green and brown. The wind. The sun. His mouth was dry and his breathing a little ragged but for that moment he truly felt himself a Master of the Universe.
He leaned forward, his legs rising toward the horizontal, and reached way out to grab canvas. He felt the sail fill beneath him and in less than a second he was lying on the billowing sail, head and face down, and sliding forward.There was nothing he could grab but the sail itself. Nobody on deck could see his predicament. His stomach felt as if someone were jamming a broom handle into it. He wondered if he might possibly bounce off the lower sails as he fell and land in the water. He wondered just how much it was going to hurt when he hit the deck.
The sail collapsed as suddenly as it had filled. His stomach landed on the yard and his frantic feet found the foot rope. Following several shuddering breaths, he reached forward to grab canvas. Even Masters of the Universe have bad moments.  Read More