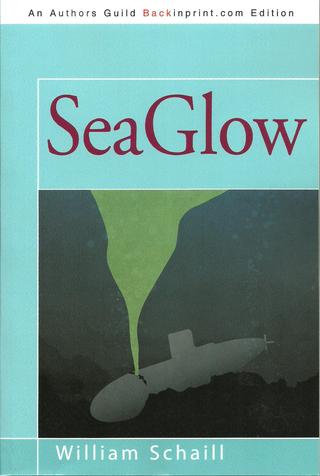 SEAGLOW - - A Sunken Submarine Vomits Radiation into the Gulf Stream

Once back in the main cabin, Nash rejoined the girl with whom he’d boarded. Had he seen her, Madeira would’ve considered her very pretty. Hard but pretty.

"How’d it go?" she demanded as Nash sat down next to her.

"Fine," Nash replied. "It’s all go, and no matter what happens, we’re golden. He’s not Navy anymore, he’s not ours. He’s mercenary now. We can’t lose."

It’d been there all along, he realized later. A heavy, pulsing pounding. A deep melody played to the storm’s harmony. He’d felt and dismissed it when he’d first stepped out of the bus.

Now, in the lee of the terminal building, the sound overpowered the wind’s raspy howl. He found it impossible to dismiss the shadowy helicopter parked about fifty yards ahead, its slowly turning rotors creating a muffled, but very solid caa thunk, caa thunk, caa thunk.

They sure as hell weren’t using a big military chopper to take him to his downtown hotel!

"I’ve heard a rumor he’s tied in with the Mob," Madeira prompted as they waited.

"The Mob? Criminal elements!" replied Timon, his brow furrowed. "You mean like smuggling? And stealing state property? And loaning poor sailors money, then beating them up if they don’t pay him back twice as much as he gave them? I’ve also heard such rumors, but I know nothing myself about it."

"Hurry!" It was Grivski. "You have no time to explore."

What the hell? thought Madeira. The Russians were determined to keep him out of the storeroom! Noivikoff had insisted he not cut through it, and now Grivski was hopping from foot to foot to keep him from even looking in. Was there something in there he wasn’t supposed to see?

And then a second, equally chilling thought hit him. Yes, hurry, you stupid bastard, he thought. Your diving dress provides only so much protection against the radiation.

The first thing Madeira saw when they reached the galley was the wet, lumpy red clump that had been Vasily Chernov’s head. Next to it lay Timon, dressed in work pants and a dive jersey and riddled with small-caliber holes.

"I say you’re the fool, Captain," Viktoria replied. "Both the Balts and the Ukrainians much prefer Yeltsin to the alternatives. And I’ve warned you before: Don’t call me Comrade!"

Bukinin nodded, a faint look of amusement on his face.

"And my mother was Ukrainian," Viktoria added.